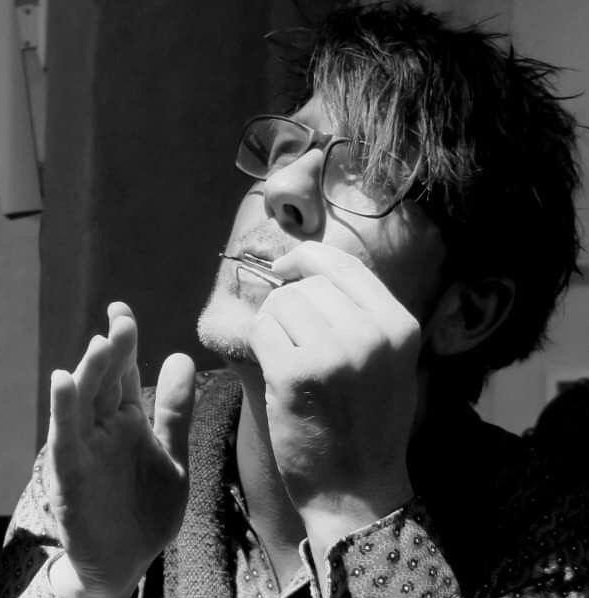 Danibal started with overtone singing and jew's harp in 1999. From 2001 on he performed solo with his jew's harp. As the vocalist of his rock band Met Tuiten (later Dial Prisko) he used the jew's harp to spice up the sound. In 2002 Danibal formed a duo with Dutch comedian Ramon Kool, called Plunk, as far as we know, the first human beat box/jew's harp combination. In 2007 the collaboration with Dutch sound artist Jan Schellink took form in the project Heug, the duo excels in absurdist improvisations with lots of live looping and jew's harping.

Danibal got involved with the IJHS as the production assistant for the 5th International Jew's Harp Festival at the Muziekgebouw in Amsterdam in 2006. With Heug he attended the IJHF in Kecskemét, Hungary (2010). Danibal also attended the Marranzano Festival in Sicily and Khomus Proms in Moscow.

In Utrecht (NL) he initiated Klangkörper, a platform for overtone music. Since 2017 he organizes concerts and session in churches for overtone minded musicians on an irregular base.

Danibal is working as a (live) cartoonist, helping out companies with witty images or visual storytelling to make it more appealing. He also produces a lot of autonomous work which he publishes online or in small press booklets. Born in Boxtel, the Netherlands, in 1967. He discovered the jew’s harp at his brothers birthday in 1981, as one of his brothers schoolmates had a jew’s harp with him, a Schwartz from Molln. Next day he bought his first jew’s harp and from that day on he seldom leaves the house without a jew’s harp (or two or five). During his childhood he was the only one he knew that played a jew’s harp. This caused an interest in the instrument and drew him to the library where every lemma of the New Groves Dictionary of Musical Instruments on jew’s harps was studied. Later the search continued online in the early days of internet. He studied Museology in Amsterdam and soon after started to work in the museumfield. First as detach worker, later a steady position in the collectionsmanagement of Rijksmuseum Volkenkunde (the National Museum of Ethnography) in Leiden.

During this time he stumbled upon a French website for which he started to write articles. Later that website announced an International Festival and Congress to be held in Amsterdam in 2006. At this festival he met Frederik Crane and was persuaded to join the International Jew’s Harp Society. Frederik showed interest for one of his articles and published it in the Journal of the International Jew’s Harp Society or in short JIJHS. This triggered the initial desire to contribute to the Journal. During the next congress in 2010 in Kecskmét (Hungary) he was blown away by the Yakut delegation.

Because of the personal situation of the Dutch member of the board of the IJHS Harm was invited to join the board in his place at the congress of 2011 in Yakutsk and stayed in the board ever since. The special atmosphere at that congress made him want to do more for the society in the form of telling jew’s hap stories.

Over the years Harm visited the USA, Sicily, Hungary, Austria, Russia, Sakha-Yakutia and travelled basically all over the world in pursuit of the instrument.

At the 2014 Congress/Festival in Taucha, it was decided that Harm would form an editorial board for the JIJHS with Michael Wright after the decease of the former Editor Frederik Crane. This resulted in Journal 6 in 2016.

Everyone with a jew’s harp related story is welcome to mail the editorial board; tips on subjects are also most welcome!

Kak Izgotovit Varganofon, a translation of the former article into Russian on the website Khomus.ru, 2006.

Creating a Jewsaphone, a translation of the fomer article to English for the website of the North American Jew’s Harp guild, 2007.

2016. “Birmingham – Kwazulu-Natal revisited, Discoveries from the Photoarchives of the Museum of World Cultures, Leiden, The Netherlands”. Journal of the International Jew’s Harp Society 6: 8-20.