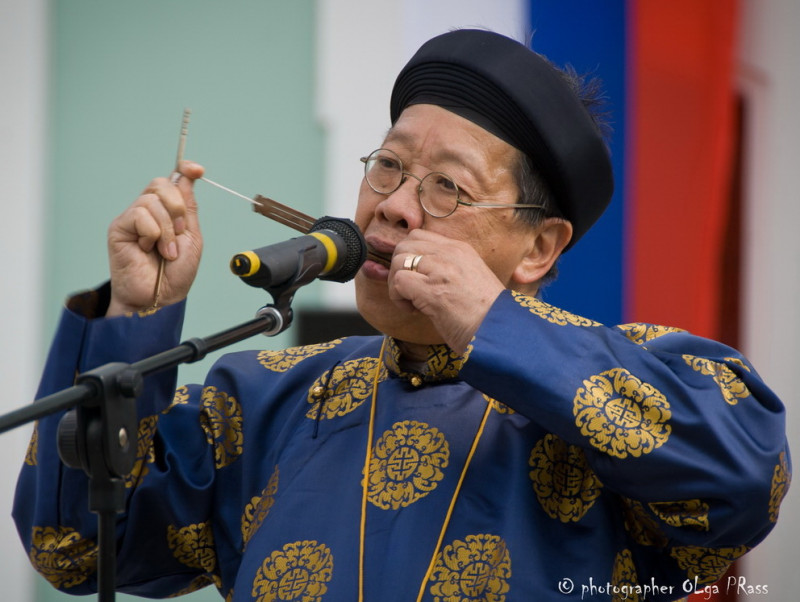 Tran Quang Hai has died on 29 December 2021 at the age of 77.
He was a man of love, loving all expressions of life.
He had the soul of an innocent child, with all its curiosity, enthusiasm and vulnerability.
He was a man full of humour, always with a smile in his face and prepared to laugh.
He was a real entertainer, achieving well-acclaimed peaks when singing Beethoven’s “Ode an die Freude” in one-breath-overtone-technique, or when artistically playing the spoons, or when grooving with his self-designed jew’s harp.

Born on 13 May 1944 in Vietnam, Tran Quang Hai studied at the National Conservatory of Music in Saigon before coming to Paris/France in 1961 where he studied the theory and practice of Oriental music, and became friends with John Wright. Hai became an internationally renowned researcher in overtone music and traditional Vietnamese music, working for the National Center for Scientific Research (CNRS) in France (1968 to 2009), and being attached to the Department of Ethnomusicology of the Musée de l'Homme (Paris). He was a lecturer on South East Asian music at the University of Paris X - Nanterre (1988-1995). Since 1966, he has given over 3,500 concerts in 70 countries, and has taken part in more than150 international traditional music festivals. He has obtained more than 20 prizes and international awards. He has recorded 15 LPs and 8 CDs, and is a composer of popular songs. Trân Quang Hai worked with his beloved wife Bach Yên who is a famous Vietnamese folk singer.
Hai was one of the co-founders of the International Jew’s Harp Society in 1998 and since than member of the Board.

With Tran Quang Hai, the International Jew’s Harp Society sadly has lost another member of the grandfathers of the jew’s harp-renaissance of the 1970s. Now, after Fred Crane (USA, 1927-2011), John Wright (GB/F, 1939-2013) and Robert Zagredtinov (Bashkortostan/RF, 1932-2016), only Ivan Alexeev “Khomus Uybaan” is left from these giants of the global movement for the sake of our little instrument –the jew’s harp.

We have lost a dear friend!