RELEASE OF THE IJHS JOURNAL #7

The IJHS JOURNAL #7, the new issue of the Journal of the International Jew's Harp Society is finally published!

The issue has been presented and distributed in a very limited printed edition at the Festival and Congress of the International Jew's Harp Society in Berlin (July 27-30 2022), the digital edition is yet freely available on our website for the members of our Society.

How to access the journal: the MEMBERSHIP to the International Jew's Harp Society gives access to all the past publications, including all the numbers of our Journal. If you're not subscribed yet, do it now and get your LOGIN!! https://jewsharpsociety.org/joining

Our editorial team is always on the lookout for new articles/reviews, if you happen to have some interesting information or subjects don't hesitate to contact us: editorial@jewsharpsociety.org

It has been a long waiting since the last issue (2016), but you won't be disappointed.

Here is a short summary of the articles:

the authors wish to pay tribute to and recognize the merit of the man, who made an enormous contribution to the development of modern Jew’s harp studies

The Jew´s Harp in Communication: an intercultural comparison of chosen examples by Lukas Grösel

The author will discuss how it is possible to communicate through music in general and with the Jew´s Harp in particular. Also a very short introduction in phonetics will be part of this article. This will be necessary to understand how the Jew´s Harp can be  used as a phonator. The author gives a comprehensive overview by comparing the use of the jew’s harp as means of communication in courting among three different and not related cultures.

In this article the author describes the very active contemporary Karinding scene in Java through bands, workshops and festivals.

The Ediochecò, a Missing Link in Jew’s Harp Genealogy? by Harm Linsen

From old accounts and very rare museum objects, the author tries to finally unveil the shroud of mystery surrounding a very particular type of jew's harp once made and played on the Island of Enggano west of Sumatra Indonesia, that was once coined by Curt Sachs as the missing link between lamellate and bow-shaped instruments..

The author, after the study of an important treasure of ethnomusicologial recordings made within the period 1922-1994, discusses and illustrates the style of playing and the repertoire of traditional jew's harp (parmupill) playing in Estonia.

We can read the celebration of a jew's harp pioneer in the Netherlands, Ger Groothedde (1942), visual artist, jew's harp player and maker.

The Sound of Contact: historic Inuit music-making in northern Labrador by Peter Whitridge

This paper presents a brief survey of Inuit music making and its somewhat elusive material expression, focusing on the Labrador evidence.

Without any archaeological formation, the author wants to do a quick recap of the finds that he has been able to discover in years of researches to better show the historical presence of the jew's harp in Italy.

Impressions from the Shimao Site and the Ancient Jew’s Harps Found There by Gjermund Kolltveit, Áron Szilágyi and Leo Tadagawa

In September 2019 the authors participated in the International Symposium on the Jew’s Harp – New Discovery of the Archaeological Site in Shimao Huangchengtai, which took place in Shenmu, in the Chinese province Shaanxi. One part was purely archaeological, while one part was devoted exclusively to jew’s harps, because more than twenty jew’s harps were found during the excavations of the site in 2016 and 2017.

2021 sees the fiftieth anniversary of two significant albums dedicated to the jews-harp (Ivan Alexeev's “Yakutian Khomus” and John Wright's “La Guimbarde”). This short article puts their achievement into an historical context and provides an insight into the making of the albums from participants. 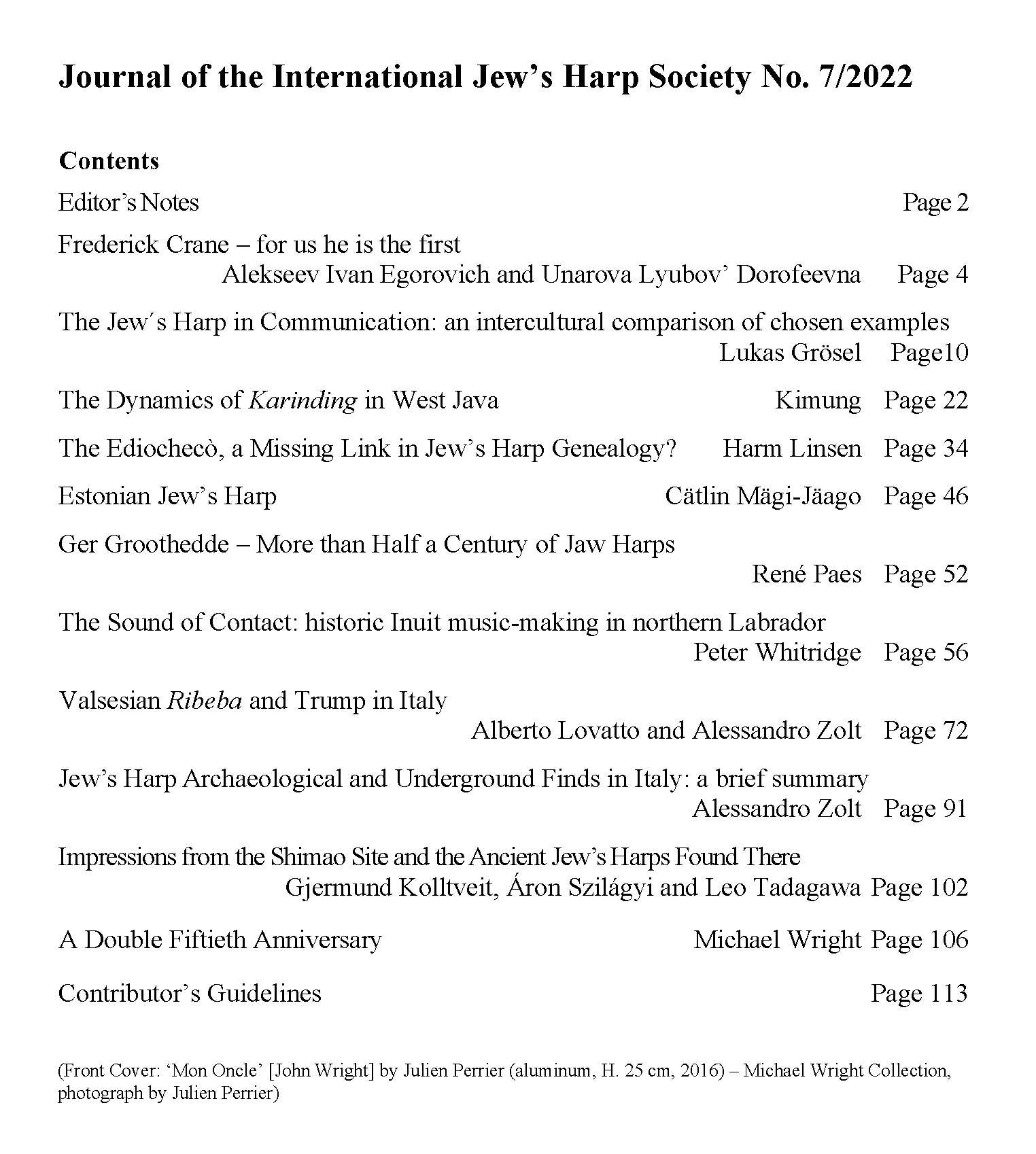